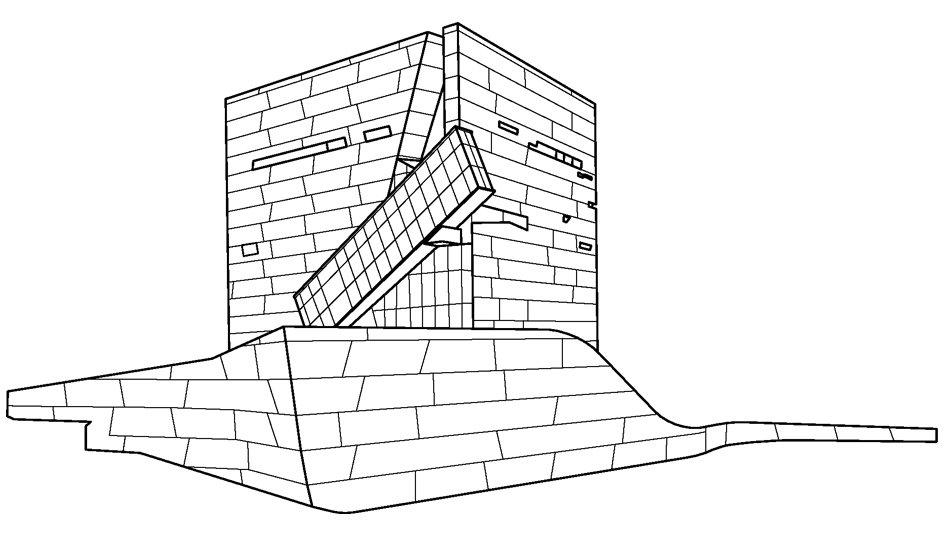 The Perot Museum originally applied for the mark described as “a three-dimensional configuration of a building” in connection with “[e]ducational services, namely, conducting programs in the fields of nature and science; Museum services; Party and wedding reception planning and coordination services; Special event planning, coordination and consultation services for social entertainment purposes.”

After the filing, the USPTO issued a design code –  07.03.25 Other buildings, including schools, hospitals and libraries. Examples are:

Also found with this design code and “educational services”;

The Examining Attorney issued an office action citing two issues required to be resolved: (i) a new drawing; and (ii) new mark description. In response, the Perot Museum provided the following: 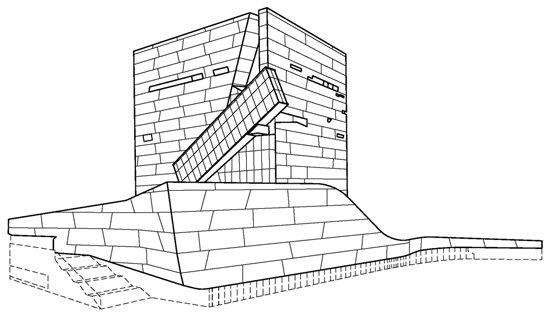 And a more detailed description:

The mark consists of a three-dimensional configuration of a building. The top portion of the building features a cube-like design with a partial triangle cut out of one corner. In front of the triangle is a rectangular bar design featuring squares and rectangles. Below the cube design features an abstract shape. The right side is rectangular, with one corner of the rectangle extending out onto a pointed tip. The left side is triangular, with the bottom section featuring a zig-zag-like design. The outer portion of the building is covered with quadrilaterals, squares, rectangles and triangles. The areas depicted in dotted lines are not a feature of the mark and are intended to show the placement of the mark.

Introduction – In the United States, a non-traditional trademark (NTM) is a mark other than the conventional word or 2D logo mark, and can be shown in many formats such as 3D, color, sound, motion and including gestures. A “gesture” as defined by the Merriam-Webster dictionary is “movement usually of the body or limbs that expresses or emphasizes an idea, sentiment, or attitude [e.g., he] raised his hand overhead in a gesture of triumph …”

FD of EWaI applied for a 3D “rule booklet consisting of the color red that is consistent across the front and back covers … with the words “MY LITTLE RED RULES BOOK” on the front cover. The solid lines show the positioning of the mark on the goods and those features claimed by … [FD of EWaI] as its mark” to be used in connection with, “[b]ooklets in the field of select legal rules and statutes primarily for use by criminal defense lawyers practicing in the United States federal district courts (and by some federal judges).” The colors red and white are claimed as a feature of the mark. Below is a specimen, a photograph of the 2014 booklet:

Below is the drawing depicting the mark as applied for by FD of EWaI: 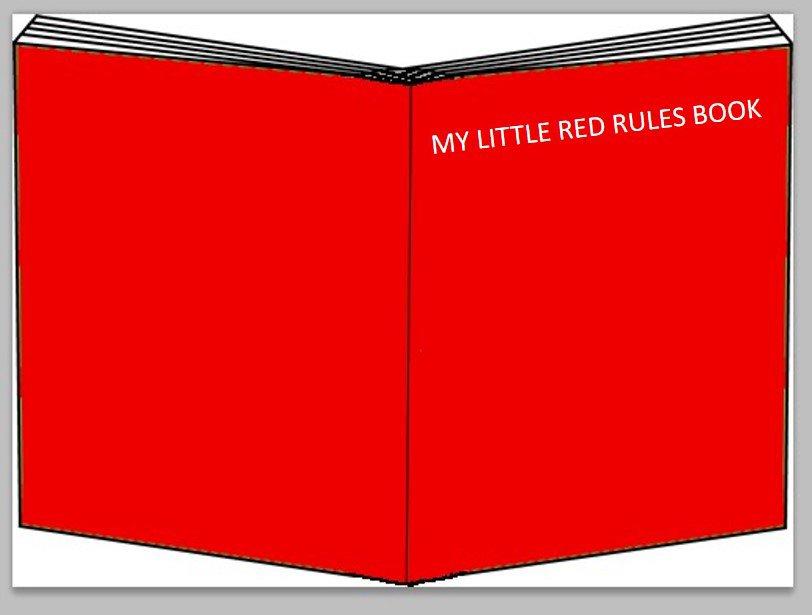 The USPTO assigned the design code 20.05.0 that covers “open books” as follows:

And with “red” color:

The Examining Attorney issued an office action with two objections:

1. Single Title of Work: application shows a single title of work which is not registrable in the United States. That is, “[t]he title of a single work, even an arbitrary title, is considered descriptive of the contents of the work itself ‘and is not associated in the public mind with the publisher, printer or bookseller;’ whereas ‘[t]he name for a series, at least while it is still being published, has a trademark function in indicating that each [work] of the series comes from the same source as the others’”; and

2. Drawing:  FD of EWaI “must depict the mark in the drawing to include broken or dotted lines to show the position of the mark on the goods.”

In response FD of EWaI provided a new mark description (“… [3D] configuration of a booklet with a red front cover and red back cover and the words “MY LITTLE RED RULES BOOK” in white on the red front cover. The broken lines depicting the outline, spine and pages of the booklet indicate placement of the mark on the goods and are not part of the mark”) and a new drawing: 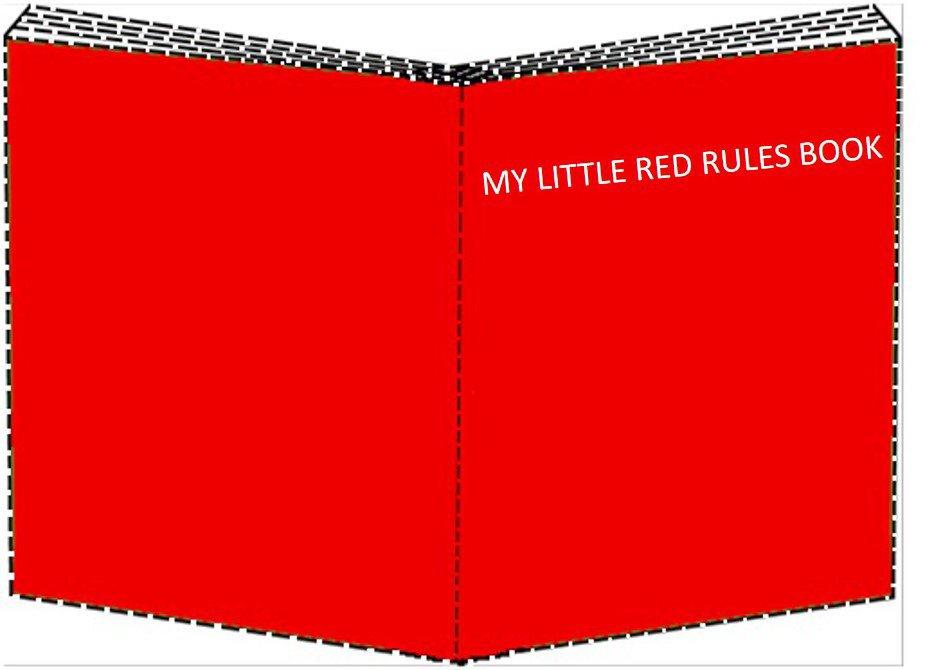 FD of EWaI also addressed the “single title of work” objection by submitting evidence that the book is a series of books, at least, from 2007 to 2016: 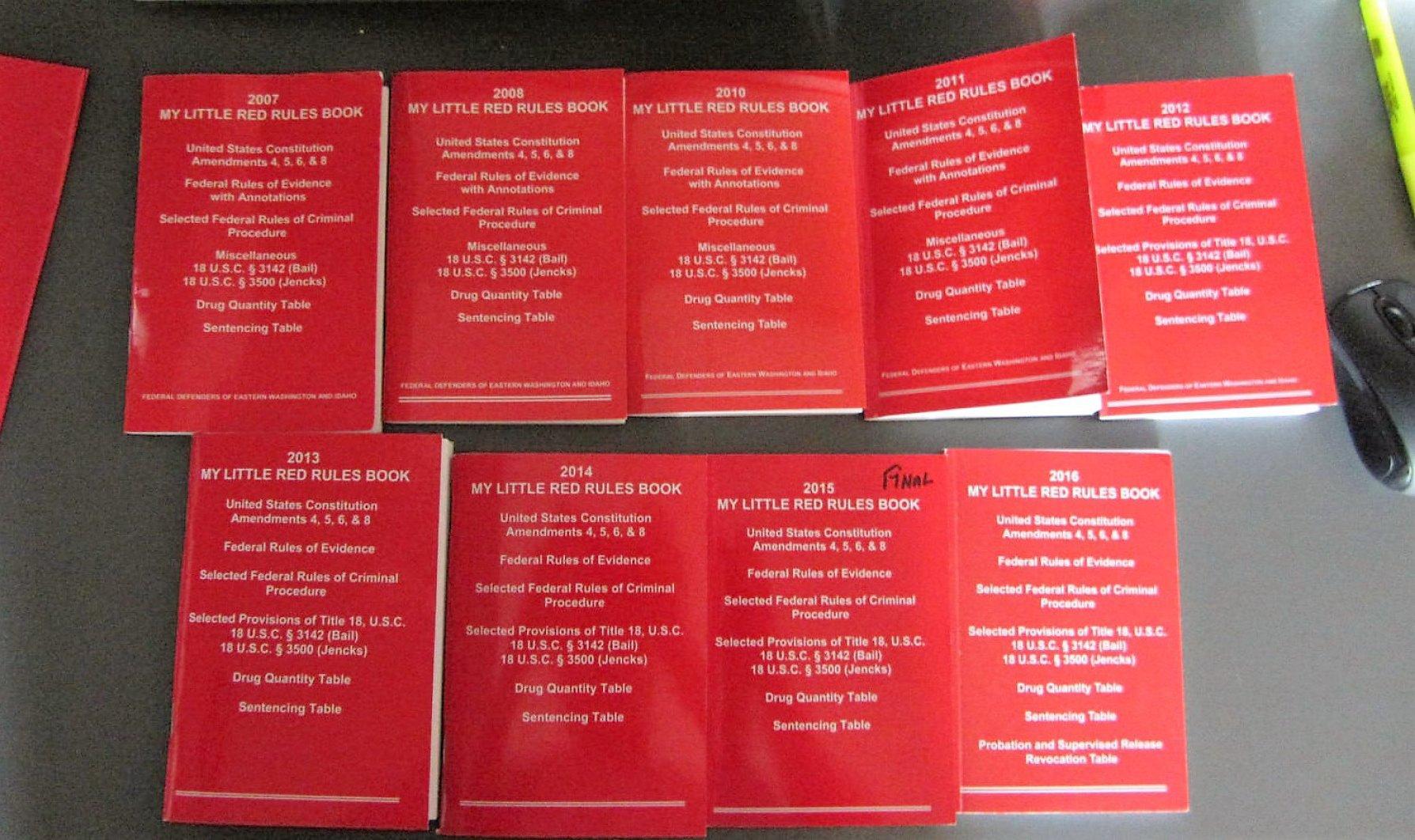 Claire Flowers applied for a shoe design that “consists of a pink heel cap on women’s high heel footwear that contrasts with the color of the heel and sole of the shoe. The dotted lines are not part of the mark but are intended only to show placement of the mark.”

The drawing of the mark is below left and a sample of the footwear to the right.

After submission of the application, the USPTO assigned the following 09.07.06 – Other women’s shoes. A search under this design code revealed:

The Examining Attorney also searched under 29.03.01 Single [red or pink] color used on a portion of the goods or on a portion of items used in rendering the services which revealed:

After the search, the application was approved for publication. No office action issued! Registered in 7 months from application (U.S. Reg. No. 5171367).

HM Electronics applied for a 3D Headset Design described as, “a portion of a headset. The broken lines depicting elements of the headset indicate placement of the mark on the goods, but are not part of the mark as shown” and submitted the drawing and specimen below: 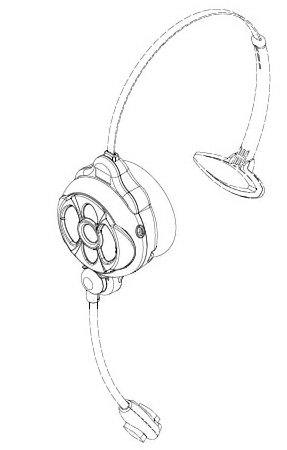 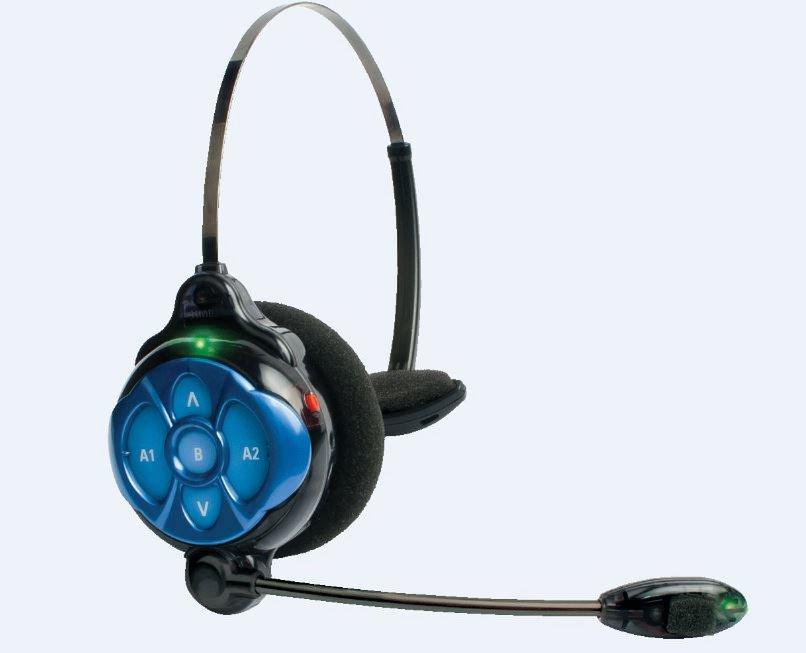 The USPTO assigned the design code – 16.01.07 – which covers headphones, headsets, microphones. A search under this design code reveals: The Examining Attorney issued an office action with several objections: (i) non-distinctive product design and (ii) functionality; as well as drawing and description clarification. HM Electronics responded and the non-distinctive product design was withdrawn but the other issues remained and a second office action issued. The remaining issues were resolved and the application was approved for publication. 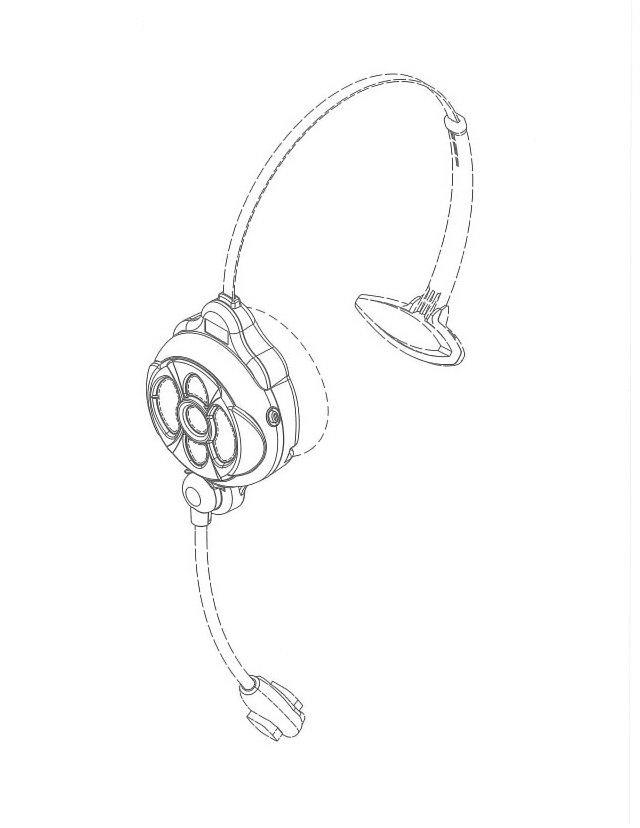 However, the application was withdrawn from publication on the grounds that the acquired distinctiveness claim was less than 5 years. This seems to be a new trend with the USPTO. In the past, the 5 year prima facie rule could be bypassed with additional evidence. That is, an applicant could show acquired distinctiveness in <5 years with an abundance of evidence. But recently, applications with < 5 years, are being returned to the Examining Attorney for further analysis.

In this case two more office actions issued with the Examining Attorney stating, “[i]n the present case, applicant’s evidence consists of the following nearly 5 years use, declarations, sales and advertising figures, advertising materials and consumer recognition reports.  This evidence is insufficient to show acquired distinctiveness of the proposed mark because of the limited amount of years in use (less than five years). Additionally, the marketing and advertising does not specifically point to or reference the ‘distinctive’ flower design, nor does it feature  ‘look for’ marketing evidence that touts the flower design.  Additionally, the consumer recognition evidence only consists of 1 affidavit from an actual customer (McDonald’s Manager), which is not sufficient to show consumer recognition to establish acquired distinctiveness.”

HM Electronics continued to provide additional declarations and information as requested from the Examining Attorney. In its last submission, several of the advertisements for the 3D Headset Design contained the requisite “look for” advertising at the bottom of the page, i.e.,  “EOS | HD = Look for the unique earpiece design”. In many applications and in this case, evidence of the “look for” advertisement can be the “key” tipping point for demonstrating that the “mark” does function as a source identifier.

After submission of the additional information, the application was approved for a second time and a registration (U.S. Reg. No. 5144104) issued February 21, 2017.

CROCS applied for  a 3D Upper Shoe Design described as a 3D configuration of an “outside design of an upper for a shoe, the upper having a gentle curving outline, a ridge along the upper opening perimeter, a pattern of 13 round holes on the horizontal portion of the upper of the shoe, a first strip along the vertical portion of the upper having a pattern of 7 trapezoidal openings, and second strip paralleling the first strip and separated from it by a divider and ridge, the second strip circumnavigating the shoe and gently rising toward the heel, and the relative position of these elements to each other. The broken lines show the position of the mark and are not claimed as part of the mark” with a drawing as follows: 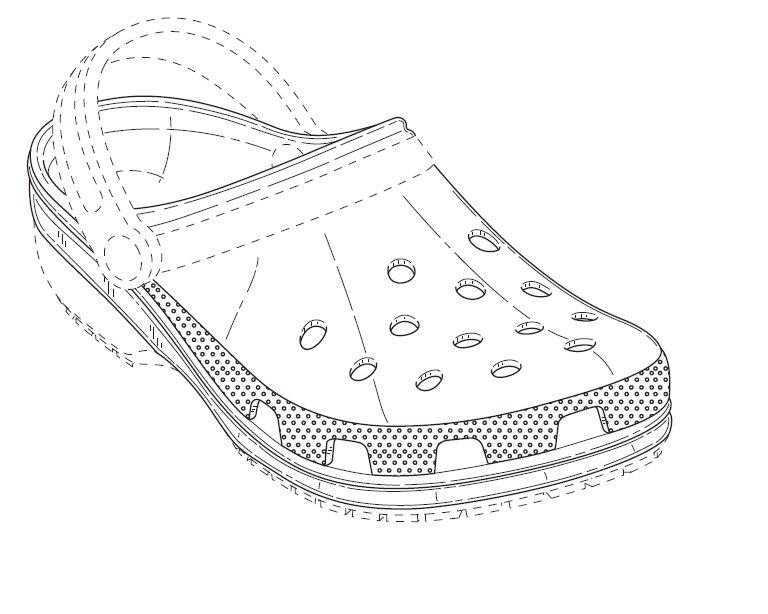 CROCS submitted 16 examples of the mark in .wav format. Several excerpts from the videos show the mark in different configurations such as: 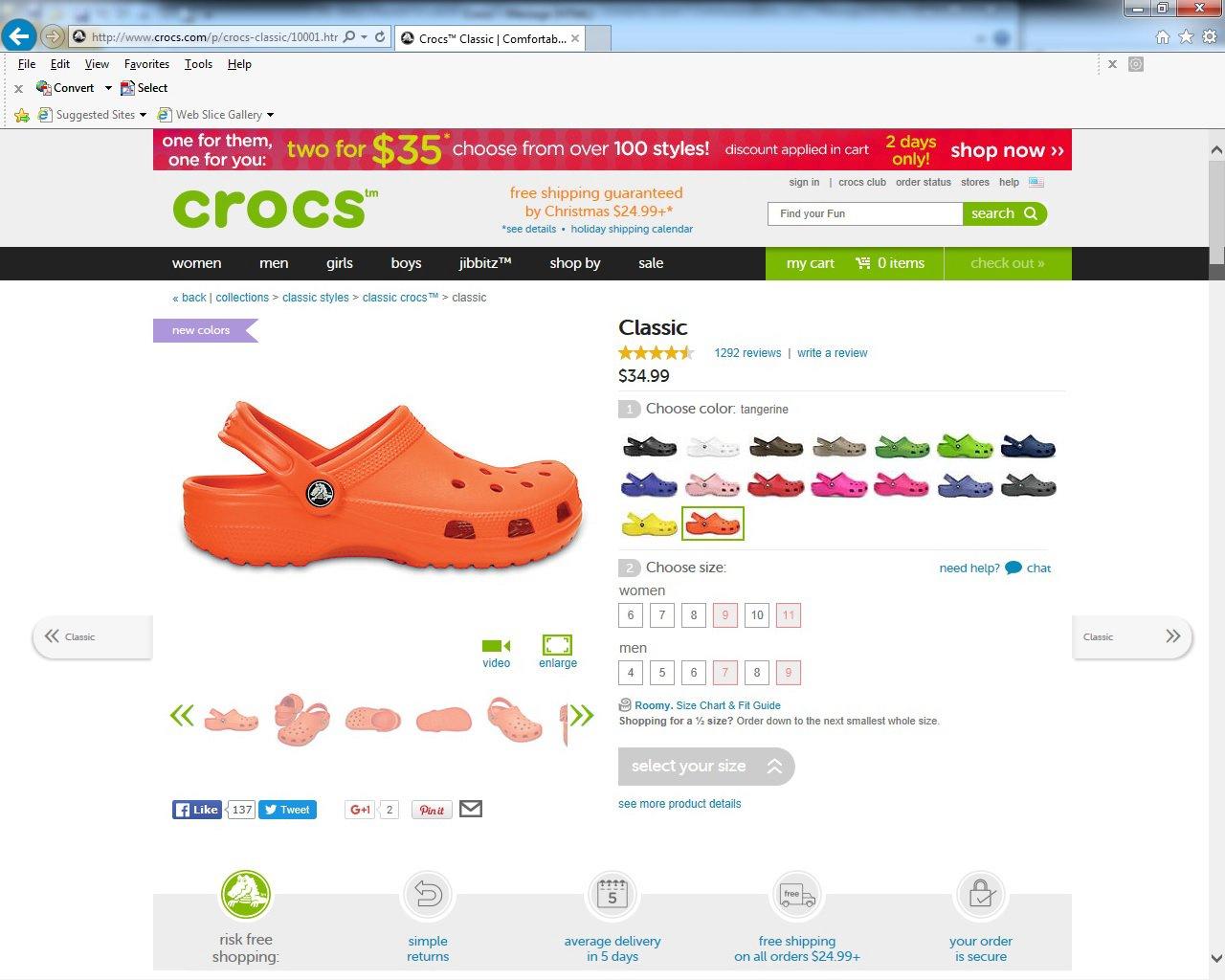 The USPTO assigned the design code: “09.07.05 – Other men’s shoes” to the 3D Upper Shoe Design. A search for marks coded with this design code revealed the following shoe designs:

The Examining Attorney also searched under the above design code as well as 4 additional  codes (i) 09.07.04 (Wooden shoes (clogs), sandals, shoes without heels, including bedroom slippers, moccasins, ballet shoes and rubbers):

CROCS design is above, left.

The Examining Attorney issued an office action with two technical requests: (i) amended drawing and; (ii) description of the mark, stating that, “the overall clog shape of the proposed configuration mark and the presence of a defined midsole and topline collar appear to represent generic elements commonly present in waterproof strap clogs.  These features are nondistinctive and do not function as a mark because such elements are so common in the industry for such products and are the same or substantially similar to the designs of competitors’ products such that consumers are accustomed to seeing such elements on similar products.  As such, applicant’s request to exclude other shoe manufacturers from employing such ubiquitous design elements cannot be granted.” With this in mind, the Examining Attorney suggested a revised description of the mark as follows:

With updates to the drawing: 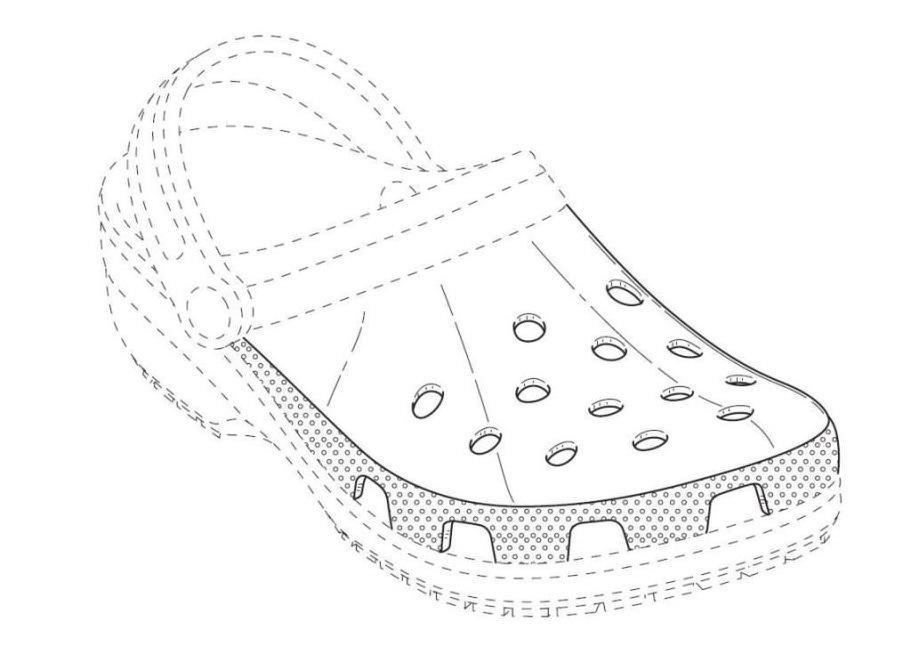 Once the description and drawing were updated, the application was approved and a registration (U.S. Reg. No. 5149328) issued February 28, 2017.

REI applied for a mark that consists of “a motion mark, in which a bright light appears and grows larger and brighter until it morphs into the logo of a stylized letter ‘R’ within a circle. The term RODDENBERRY then appears underneath, with each letter rotating until it comes into place. The word ENTERTAINMENT then fades in underneath” for “production and distribution of television programs and motion pictures.” The mark is shown in still frames as the following:

According to the USPTO, a mark featuring “a repetitive motion of short duration,” can be depicted in a drawing that “depicts a single point in the movement, or … a square drawing that contains up to …[5] freeze frames showing various points in the movement.”

To demonstrate use of the mark in connection with the goods/services, the USPTO also accepts .wav, .wmv, .wma, .mp3, .mpg, or .avi format (“[a]lthough the drawing for a motion mark may depict a single point in the movement, or up to five freeze frames showing various points in the movement, an acceptable specimen [evidence of use] should show the entire repetitive motion in order to depict the commercial impression conveyed by the mark (e.g. , a video clip, a series of still photos, or a series of screen shots).)” REI submitted the following WMV file for the mark.

The USPTO assigned the mark the following design codes:

The Examining Attorney issued an Examiners Amendment / Priority Action with two points: (i) the drawing cannot exceed 5 frames; and (ii) addition to the mark description that includes a new sentence, “[t]he black rectangles surrounding each frame in the motion mark is not claimed as a feature of the mark, and is intended to show background only.” The drawing was reduced to 5 frames and the mark description updated.

ntmblog
Create a free website or blog at WordPress.com.